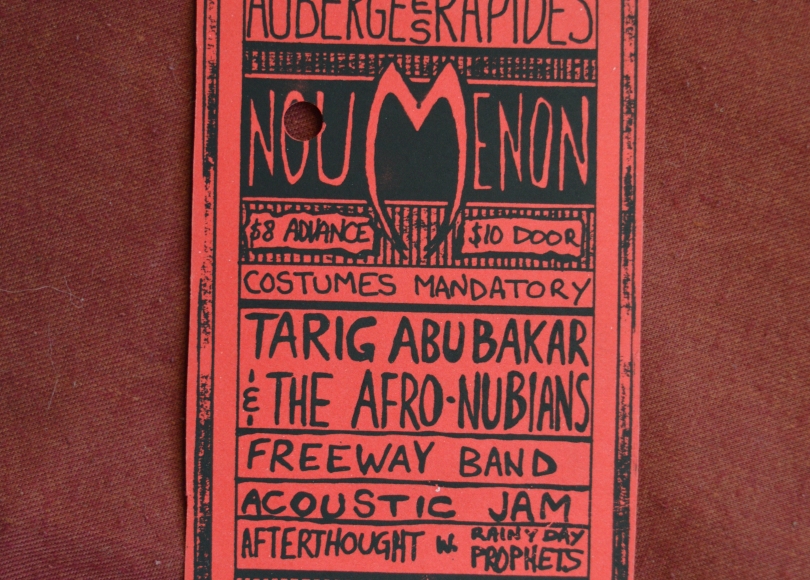 Sometime in the early ’90’s the Ottawa freaky music scene had firmly coalesced into something grand and wonderful, with a myriad of great bands and a slew of fantastic music-loving party animals regularly coming together in symbiosis at a handful of in-the-scene local music dives.  It was fun, constant, ubiquitous and in retrospect: extremely magical.  Few of these experiences were more mystically connecting than the crazy nights out at Auberge where someone had started an annual New Year’s Eve party that regularly brought us all together and entwined us like hibernating snakes.

After a number of these consistently successful and off-the-charts fun NYE gigs my good friend Corey decided to organize Hallowe’en shows at Auberge, awesome live music conglomerations that proved to be just as successful and just as fun as the NYE gigs.  I believe there were only two of these Hallowe’en shows and if I’m not mistaken the first was on October 29th, 1994.  (It’s quite possible that a band I was in called Bob Loblaw played the second one, but there’s a good chance that had been a New Year’s show.  I know we played the set wearing matching ’70’s tuxedo jackets, cummerbunds and bowties, and boxing shorts in lieu of pants so it could have been either of the holidays.)

Corey was a philosophy major so it’s no surprise that he named the event after a Kantian concept of transcendental idealism called Noumenon.  He got my old university roommate Alex to draw up the tickets and he booked a few of the city’s consistently good hippie bands (including the greatest of them all: the Freeway Band) along with an unknown “ringer” from Sudan (via Toronto), a sax playing bandleader named Tarig Abubakar and it was all just terribly fantastic.  I remember Corey was dressed up quite convincingly as Frank Zappa, me and my girlfriend were a somewhat passable John and Yoko and my roommate JP went as the Zig Zag dude.  There was a guy who I barely knew from Moncton who was passing through town on his way out west and sleeping on my couch so he came along as well.  I think he dressed up as a guy with a knife in his chest (which was a fairly common costume amongst my circle of friends back then).

Sadly, I recall my Moncton acquaintance becoming quite overwhelmed by the enveloping freakiness of the whole scene – especially the crazy clown who walked throughout the bar carrying a large silver serving tray full of sugar cubes – and he basically hunkered down alone in a corner until it was time to leave (which would have been a very, very, very long wait, both chronologically and psychologically).  Luckily, while he was cowering and darting his eyes back and forth he would have at least been exposed to some seriously great music.  I remember Freeway playing and just killing it; man they were so good, but when Tarig Abubakar and his AfroNubians started playing their sinewy African melodies over an endless dance rhythm the bar exploded in ecstatic glee.  I mean nobody was sitting down, except maybe dude from Moncton.  My goodness it was such a great night.  Astounding that we used to be able to have that much fun for $8.

Bottom line: those Auberge shows were the stuff of legend and I relish every shard of memory I have from the five or so times I attended.  I tell you, if those walls could talk we would all be in a lot of trouble.