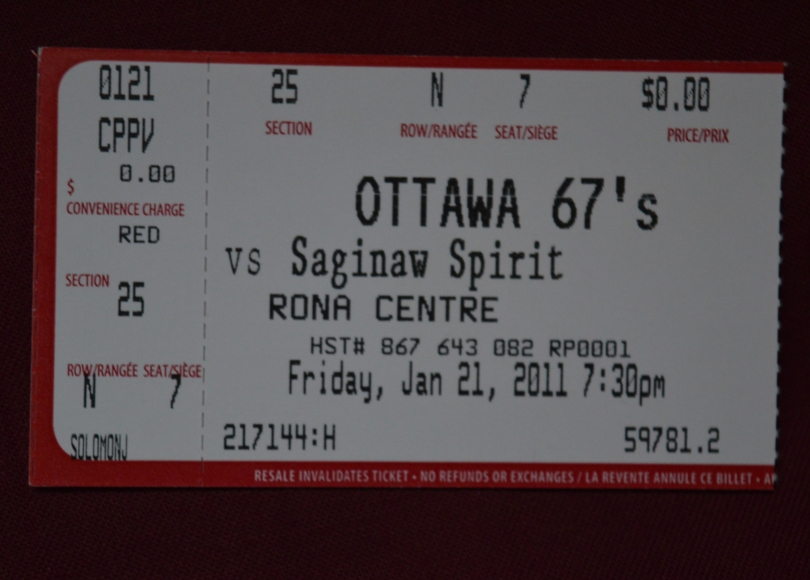 On January 21st, 2011 I went to see the Ottawa 67’s play hockey against the Saginaw Spirit at the Civic Centre.  I can see that this ticket was a comp, which I must admit makes me feel a little bad.

I’ve gone to see the 67’s play a handful of times and I’ve got to tell you those OHL games are pretty much every bit as exciting as sitting through an NHL game.  Sure, the players aren’t nearly as experienced as their highly professional counterparts and truth be told many of them will never actually make it to the big leagues, but all of the players are young and hungry, and it looks like they are having a heck of a lot of fun out there.

Plus the 67’s organization does a great job at keeping the crowd entertained throughout the entire game, with plenty of announcements and activities between the plays and lots of things going on between periods.  Overall I’d say that they do a much better job keeping things rolling than the Sens do out in their big arena, and all of it for a much, much cheaper ticket price.

Or so I am told.  As much as I’ve enjoyed every Ottawa 67’s game I’ve attending I’m pretty sure I’ve never actually bought a ticket.  Which, as mentioned above, gives me a bit of remorse.

And really it’s kind of strange, as I have a tendency to support these sorts of things.  No better time than the present I suppose: I think I’ll check their upcoming schedule.