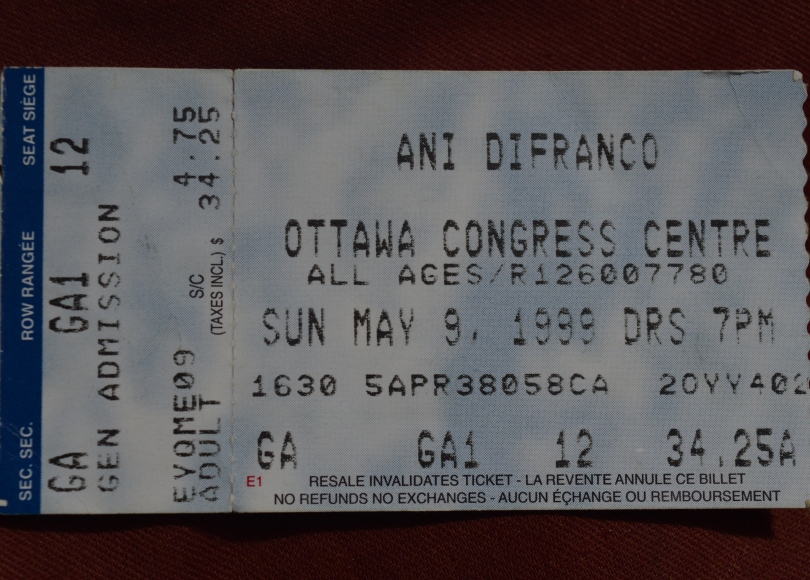 In the pre-millennial days Ani DiFranco was a bit of an anomaly.  She was a fiercely independent artist in an industry that turned a blind eye to anyone not signed to a major label; a frumpy, rebellious guitar phenom snubbing her nose at the MTV-inspired expectations of female artists in the wake of an era dominated by Madonna-esque girlishness, and all this just as the Lillith Fair ideal was blossoming.

And speaking of anomalies, the opening act for her show at the Ottawa Congress Centre on May 9th, 1999 was a curious trio called Drums & Tuba.  The incredibly tight drumming and manic brass bass lines were adorned brilliantly by some very creative and shimmering guitar playing.  The unlikely trio were impossible to ignore, with the tuba player flailing about the stage wielding his unwieldily instrument with puffed cheeks and waves of perspiration.

I don’t remember too much about Ani DiFranco’s set except that her guitar playing was very solid and very aggressive.  After all these years I can picture her onstage vividly but I couldn’t name a single song she played.  I’m sure the multitudes of patchouli-bathed Ani-lookalikes around me (of which there were many…clichés generally come from somewhere you know) remember the musical aspect of this show much better than I, but to be fair I walked in with only the most pedestrian familiarity with her music.  I waked out basically the same.

This would be the only time I’d see Ani DiFranco (so far) though I went on to see Drums & Tuba many times.  It was one of those shows where I got more out of the (previously anonymous to me) opening act than the headliner.  It wasn’t the first time and wouldn’t be the last.