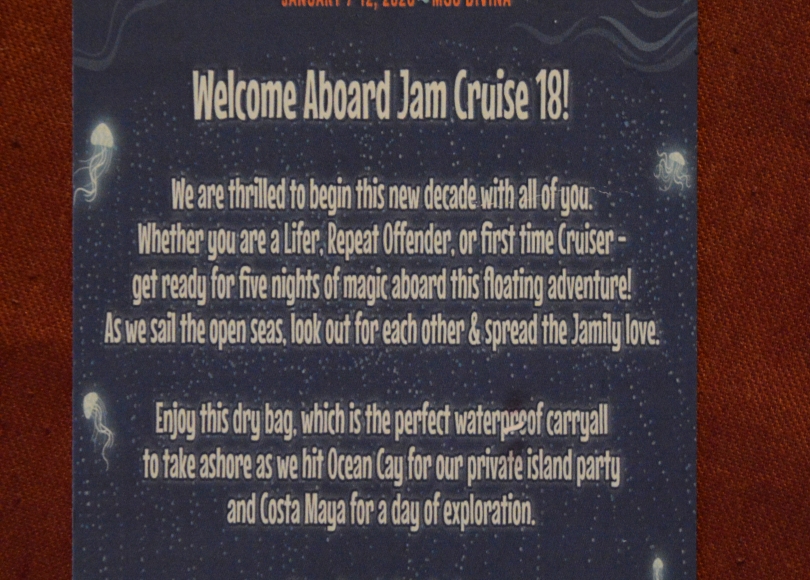 January 9th, 2020 was Day III of that most legendary floating music festival: Jamcruise.  I awoke at 9am and, figuring I had enough sleep under my belt for the night I got up and went to the gym for a half-hour of sweaty exercise, which felt great.  Any calories lost were immediately regained as I spent the next hour picking away at an expansive and leisurely breakfast in the buffet.

As I watched the random kooks and weirdos drifting through the cafeteria and I pondered the absurd possibility of a family somehow booking themselves onto Jamcruise by accident and boarding the boat expecting just an ordinary run-of-the-mill cruise with ordinary run-of-the-mill cruisers and it made me laugh out loud.  The Jamcruise people are all fine folk – no questioning that – but they are also a right bunch of weirdos who let it all hang out while they are on the boat and to imagine throwing a straight family into the mix created a comical cranial chaos that captured my thoughts for a good part of the breakfast hour.

I was so busy amusing myself that I was caught off guard when the music day began.  I had somehow overlooked a 1pm start-time for Robert Walter’s workshop in the private Master’s Camp At Sea area (which m’lady and I had fee’d up for) so I rushed down to the MCAS get-together only to find he wasn’t there. In his place was the wonderful Eric Krasno – no surprise as he was basically the host-musician of the whole workshop series – running through tunes straddled by his usual musical suspects.  I only caught the last song – a Herbie Hancock groove – and they grooved it hard.

After the workshop I found m’lady just as she was starting her own day and back to the buffet we went (oh, the calories I was taking in on a daily basis!), and then we began our conjoined musical day on the pool deck under a sweltering sun with Grateful Shred.

With a name like “Grateful Shred” I expected them to actually have a sound of their own but no, they are simply a straight-up cover band.  Disappointed, I grabbed my first frosty beer of the day and forced my judgement-meter into the “off” position so I could enjoy some sunny afternoon Grateful Dead tunes just like everyone else, which I did.

I left them to rush down for the Charlie Hunter master class, something I was quite excited about.  He started off his workshop by stating what was plainly obvious: that he was very, very seasick and furthermore he was going to have a hard time sticking around long enough to complete his entire workshop.  And true to his word, about thirty-five minutes in to his seventy-five minute session he threw in the towel, apologized that he was too ill to go on and hustled his ever-greening self out of there and back to his room.

In his abbreviated session I managed to learn several things: 1) Charlie Hunter is completely drug-free, to the point of refusing to take seasickness medicine, 2) His instrument is tuned G, C, F, C, F Bb, and the lowest three strings are bass strings, and 3) he is an astoundingly good guitar player, and he is very, very well-versed in jazz.  Like, the dude is amazing.

With some time to fill I was happy to join my new friend and fellow Master’s Camper Dylan for a tour of the special VIP Cruise Club area, which was quite nice.  He and his wife had their own 24-hour concierge and a shiny and futuristic lounge that looked like the control room of a super-villain’s mountaintop lair that served up free snacks and drinks (and not just the cheap stuff – I had a double Jack Daniels), and their room was pretty posh with a delicious balcony overlooking the bow of the ship.  It was great but the problem is why would you want to spend time in a private hotel when there was so much to do on the rest of the boat?

With that in mind, after a quick drink we went back downstairs to catch Steve Kimock’s workshop, which ended up being hands-down the single greatest part of the entire Master’s Camp At Sea series.  I’ve known Kimock’s name for quite some time and I may have even caught him live once or twice over the years but to be honest before this seminar I didn’t know Steve Kimock from Adam.  I wouldn’t have recognized him if I sat across from him and other than telling you that he was a guitarist I couldn’t have described his sound in the least.

But I sure do know him now.

I’ve been to a million musical workshops over the years and they are almost always very, very short on actual instruction; they are generally just intimate concerts with some Q&A thrown in between songs to make it feel more intimate.  But every once in a while you get someone who wants to teach an actual masterclass, and that’s what Steve Kimock did.  He sat down with nothing on his mind, played some exceptionally good solo guitar (why was I so surprised to finally notice that the best jamband musicians are actually jazz players?) and then asked we the audience what we wanted to learn.  Someone said “how do you come up with the lines you play,” and Kimock put his head down and sat silently for at least a minute – I thought he fell asleep – before starting to speak and very slowly and quietly a bespectacled buddha emerged and spent the next hour completely blowing my mind.

I’m not blowing my own horn here but I am pretty up on my music theory; I was very interested in the theoretical side of my Bachelor of Music undergrad training and since graduating a quarter-century ago and spending the interim teaching and learning music music music I have never stopped rolling the numbers of sound around in my curious head.  So like I say, I’m pretty up on my theory, but I have to admit Kimock kept my brain on it’s toes from start to finish.  I leaned in and paid attention to every word, and I wish I could do so again.  He has a vast understanding of theory and is deeply entrenched in a Lydian-leaning approach that sees him centre around major triads based on the root, third and fifth of a chord built on the flat six of the key*.  And the crazy thing is he does this whether he’s looking for a major tonality or a minor one.  When it came down to the actual lines themselves he talked more about which notes to avoid than which ones to hit which isn’t an uncommon approach in and of itself, but his choices were pretty choice.

Don’t worry, he left the rest of the group behind somewhere around the first sentence too.  But man, I loved it.

After Kimock’s mind-bending class I wanted nothing more than to go back to my room to practise, but fortunately I had left my guitar back in Canada because I actually had a lot of music to go see!  Now sure, I could go on to describe every band m’lady and I took in over the next dozen hours or so but to do so would require chapters, and this ticket story has already run on much too long.  Instead I will try to be brief yet descriptive and supply just the tiniest info wisp on each act of the day.

Robert Walter’s 20th Congress out on the pool deck was spectacular, especially because he had that Seattle dude Andy Coe playing guitar with him again.  Love that dude.  Then Keller did a solo set which was much less interesting to me than his Grateful Grass set earlier in the cruise, but what are you gonna do?  Keller will be Keller.  I tucked into the Black & White Lounge for a little of Ghost-Note who were hot hot hot, but not as hot as that room always seems to get, so I bailed after just a few tunes.  Good thing too, because I managed to catch all of Ghost Light’s set out of the fresh and clear pool deck (you read that right; there was a band called Ghost-Note playing against a band called Ghost Light).  This was my first time hearing the Holly Bowling/Tom Hamilton creation and they (Ghost Light, that is) were probably one of the best things I heard on all of Jamcruise.  They were just super-great top-to-bottom, and they had some truly great songs too.  I loved ‘em.

(Allow me a moment to make the joke that I spouted countless times on the cruise:  “What’s the deal with all these bands on the boat having almost the same name?  Like Lettuce and Lotus, Ghost-Note and Ghost Light, Pigeons Playing Ping Pong and [slight pause for comedic effect] Turkeys Talking Table Tennis…”  For real: half the time I would have to explain that I was kidding about the TTTT band.)

After a light rain got a bit too heavy to enjoy m’lady and I left during Ghost Light’s last song and ducked upstairs to the cafeteria for Chefs at Sea, a nightly themed offering curated by a rotating roster of professional chefs from across America, which on this evening featured upscale street food.  It was quite good but possibly the least of the three times I took advantage of the midnight gourmet food addition to the cruise.

After eating much more than was necessary – as if any part of my sixth meal of the day was necessary – we went back to the pool deck where I heard Lotus for the first time.  I don’t know what I was expecting but I was disappointed to discover they were another similar-sounding one-chord groove-rock band so I gave them less time than I probably should have and went instead to catch as much of Karl Denson’s Tiny Universe in the theatre as I could before weariness took over and nudged me towards my bunk.

Which – to be honest – wasn’t much more than an hour, if that.

*So in the key of C he combines triads based on each note from an Ab chord, which ultimately gives him C D#(Eb) E G Ab Bb**.

**And here’s the rub: Though Kimock never stated it as such, I know his approach was Lydian-based; it was my immediate takeaway as I walked out of the room happily shaking my cluttered head, but once I started actually working this stuff out it occurs to me his resultant scale (above) isn’t Lydian at all.  Not only does it not have a #4, it doesn’t have a fourth degree at all.  So one of his particular avoid notes is exactly the note that outlines his approach.  Curious…***

***I’m amazingly boring to talk to at parties.