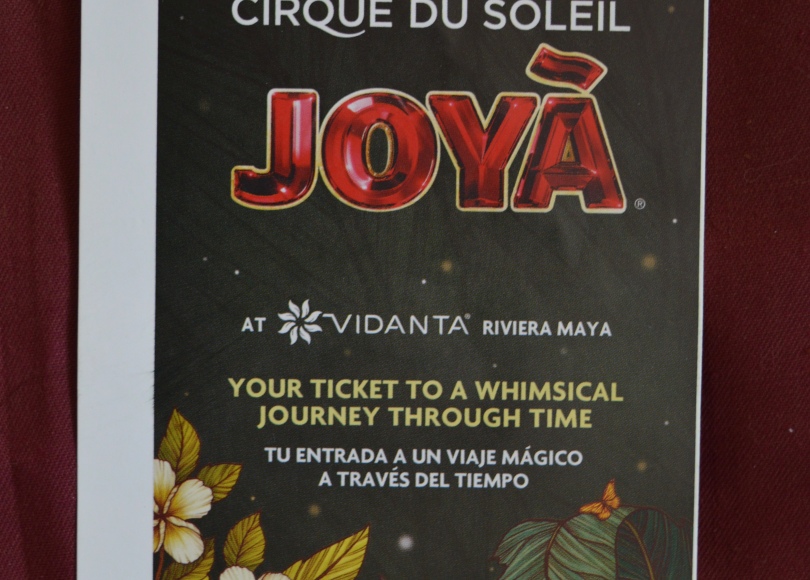 I want to tell you, those Cirque du Soleil people really know how to entertain.  Start-to-finish, my experience at (and around) Joyà was utterly unique, endlessly enthralling, and completely first class.  It was like nothing else.

But to be fair, I was in a pretty good mood when I got there.

I had woken up in a very quiet and hip boutique hotel in Cozumel, Mexico on January 11th, 2017 and enjoyed a blissful breakfast with m’lady.  After breakfast we packed up and checked out, capping an amazing five-night scuba vacation.  We ferried over to the mainland, checked into a hotel in Playa del Carmen and walked the strip until we found what turned out to be the best burrito place in town.  After a long, relaxing afternoon of cerveza’s and people-watching we shunned the 350 peso taxi in favour of the 50 peso collectivo and got ourselves to the Cirque show.

It’s actually more of a complex.  The collectivo dropped us just across the street from one of the many big, fancy resorts (much like the one we would be checking into the following day), where we walked up a dark road running perpendicular off of the main drag.  Soon we found the parking lot and there, rising out of a perfect lake and glowing in the distance was the breathtaking made-to-order Cirque du Soleil theatre.

We picked up our tickets at the booth and posed for some fun pictures with a box of prop hats and feathered boas and the like before strolling down a bricked path that wound along the lake.  We parked ourselves at an immaculate open-air bar with shockingly good service and an atmosphere that was nothing short of divine.  I ordered a habanero margarita – how good does that sound?  Of course things were a tad pricey so we nursed our drinks but man, talk about a tasty preshow bevvy in a stunning locale!

Soon enough a dugout canoe started circling through the lake.  Upon it was a drummer and a fire-spinner.  This was clearly an unspoken signal for us to take our seats for dinner so we joined the gathering crowd and continued up the interlocking pathway towards the theatre.

I could only gasp.

Except for a few rows of seats in the back this was dinner theatre so the round, open amphitheatre was ringed with tables and chairs set up in a stunning combination of elegance and high-end whimsy.  Of course every seat was aimed at the stage, a round platform that was lined to the ceiling with bookshelves cluttered with nicknacks.  As we were being seated a Cuban-sounding trio consisting of violin, percussion and harp sat in the middle of the stage playing the most laid-back upbeat Spanish music you could dream of.

We were led to our table in the front row, just one table to the right of dead-centre.  Champagne was popped and we were given menus.  After the waiter took our order he pointed out that the menus themselves were edible.  He presented us with some dipping sauces and they turned out to be quite tasty.

Three or four servers quickly pounced and with a flurry of clickety-clank they transformed our table into a stage for the most curious and delicious meal I’ve ever had.  First, our server arrived with a large spoon and held it up to m’lady’s mouth.  “Just eat it, quickly!” he insisted.  With a look of amused shock in her eyes, we both watched as a plume of steam flew out of m’lady’s mouth as soon as the spoon went in.

When he held another spoonful of the mystery hors d’oeuvre out to me I ate it fast and eagerly, and like a dragon I breathed fire.  To this day I have no idea what I put in my mouth, but I’d do it again in a heartbeat.

The same could be said about several of the things I ate before the show, especially the array of starters.  There was one pile of…stuff…on my double-decker plate (yes, my plate was bi-level) that dissolved as soon as it went into my mouth.  It was the oddest sensation; it would be there on your spoon all white and lumpy, and when whatever it was hit the palette it left nothing but a void and a tiny wisp of subtle cheesy flavour.  It was so very strange and delightful.

For my main I ordered the short ribs and they were the best I’ve ever eaten.  Overall it was probably the finest meal that’s ever been set before me and until I dine with royalty (or return for another dinner at Joyà) I suspect it will remain such.

After dinner we were each presented with an old, thick book, but when we turned to page one we discovered that the tomes were hollowed out and inside were our four desserts.

Uh-huh.  Four desserts.  And the champagne kept coming too.

They had me so primped and pampered that I was already convinced that this was the best Cirque experience imaginable long before the show even started.  When it did start we were treated to a ringside seat to one of the greatest shows on Earth.  This one (flipping back and forth between English and Spanish) was about a grandfather, his lost book of magic (hence the pervasive book motif), and his loving granddaughter Joyà who intended to get the book back.  There was much bouncing and ballyhooing, acts flying all around us as we craned and turned trying to keep up with it all.  At one point a pirate gripped my shoulders and ducked behind me in an attempt to hide from his foe.  Like I say: we had good seats.

Up close it’s clear to see that these acrobats are really, really acting.  They aren’t just going through the actions on their way from one stunt to another, they are really putting on a show.  You’d think that cameras were stuck in their faces.  I guess it’s that kind of attention to detail that allows the drama to reach the back of the room.

There was a juggler, a fairly lame trapeze guy, a pair of self-juggling humans, lots of pirates, a couple of good audience gags including one that featured a plant selected from the crowd, wall bouncers, thing balancers, rope skippers that would put the girls back at Birchmount Public School to shame, and the whole shebang ended with three overblown acts all occurring at once in a frenetic 360 degree extravaganza of motion.

Anyway, the whole show – the whole night – was incredible.  On the way out we were stopped in our tracks by a trio of ladies in the bar playing the most wonderful interpretations of irresistible pop songs; like, Kung-Fu Fighting with the whistle solos and everything and a killer version of George Michael’s Faith.  Where does Cirque du Soleil find these people?

When all was said and done we joined several of the employees (and zero of the other tourists) in the collectivo back to Playa del Carmen.  It was pretty packed but it was a fun ride, and so very inexpensive.  We meandered along the quiet, empty strip until we turned a corner close to our hotel and ran smack-dab into a massive electronica festival called BPM.  It was so unbelievably raging we had to backtrack and take the long way around to get to our hotel.  There was literally no getting through the crowd, so thick was the techno-frothed throngs of ecstatic ragers.

From our hotel balcony we could hear the revellers continue to revel, and when a short downpour started up they all started screaming with joy.  Good on ya, you hearty little partiers.

(Sadly, just a few days later at exactly the spot we walked by someone showed up with a gun and started shooting up the BPM Festival.  Apparently it was retaliation from the mob for not getting enough protection money from the organizers.  Five people died, including a Canadian working for the fest.)