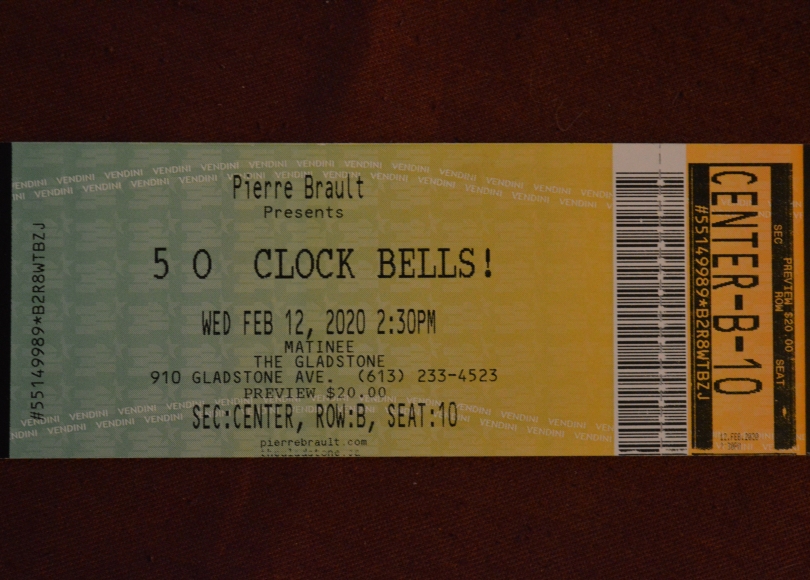 In the middle of February, 2020 I found myself back in Ottawa on my first ‘work’ trip away from my new home in Newfoundland.  I was in the big city for a full week with only a handful of rehearsals and a couple of performances to occupy my time, so (of course) I looked around for some worthy entertainment that would help keep me busy.

Unfortunately I came up entirely short, with nary a concert nor even a local band at a local bar to draw me out.  On one of my final laps around the internet before leaving St. John’s I did, however, discover an interesting tidbit of a musical happening coming up at the tiny Gladstone Theatre: a one-man play that delved into the life and career of one of my favourite guitar players of all time, the inimitable and quite incredible Lenny Breau.

The show was called Five O’Clock Bells (named after a tune that Lenny wrote that almost came close to being a mostly unknown standard in the relatively unappreciated jazz repertoire) and it was written and performed by Ottawa actor Pierre Brault.  I remember when this show debuted a few years earlier, back when I was an Ottawa resident with such a wide variety of entertainment options that I could easily give something like this a miss and not think twice.  But now things were different, and I was thrilled for the opportunity to learn a bit more about one of my musical tragic heroes.

Unfortunately I didn’t learn so much after all, and to be honest I was actually a bit miffed that the story skipped over Lenny’s time growing up in my old hometown of Moncton, New Brunswick.  That said, Brault did quite an amazing job jumping from playing Lenny’s mom, dad, musical partner, two wives, and Lenny’s mentor Chet Atkins, often bouncing one line after another in rapid-changing accents to weave the tale of an underpaid, under-appreciated, astounding musical giant who was strangled and thrown into a swimming pool (likely by his wife).  There were no costumes and no props (not even a guitar), and still the show flowed perfectly, was never confusing or convoluted, and was fully engaging for the entire ninety minutes.

Ah Lenny…I wonder if he would have got his due rewards and notoriety if he was still with us?  I hope so, but I doubt it.  Heck, most people have still never heard of the guy.  If you’re one of these people do yourself a favour and give him a listen.  And yeah, all that sound is coming from just one guy.  Don’t worry if you can’t believe what you’re hearing; Chet Atkins couldn’t believe it when he first heard it either.