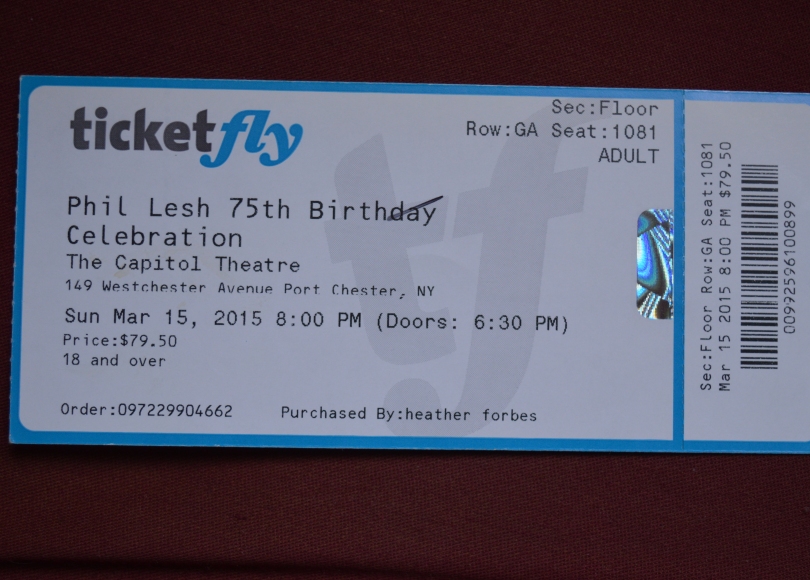 On March 15th, 2015 I went to the wonderful Capitol Theatre just this side of NYC to celebrate the 75th birthday of my favourite living bass player – Phil Lesh – with a concert by…Phil Lesh.

It was a great time in one of my favourite venues and I’m very, very thankful (grateful?) to have had the opportunity to hear Phil play yet again.  For this show his ‘friends’ were Warren Haynes, Eric Krasno, Rob Barraco and John Molo.  The concert featured plenty of cover songs – most sung by Warren Haynes – including a pair of Allman Brothers tunes, which should come as no surprise given Haynes’ long-time stint as guitarist for the Allman’s.

Of course the show was chock-a-block full of Grateful Dead songs too, including some of my favourites like Playin’ In The Band and Terrapin Station.  I was on the floor halfway back; I had great sightlines to the band and a glorious view of the wondrous 360 degree projection screen flitting above my head, not to mention direct and easy access to the liberal-pouring barkeep right behind me.  With accommodations secured at the comfortable Hilton Westchester and a second night of music ahead of me it was a near-perfect situation for enjoying myself to the fullest and I pretty much did.

And to think it almost didn’t happen.  If not for a young man named Cody who signed his organ donor card the world might have lost Phil Lesh back in 1998.  Phil received Cody’s liver and it saved the bass players life.  Lots of other needy recipients had their lives vastly improved or saved because of Cody’s donations too, and every time Phil Lesh plays a concert he tells us all about it.  It’s called the Donor Rap.

Really, the gift that Cody gave to all of these people (and their friends and families) cannot be overstated; every time I hear Phil tell the story I’m thankful once again and I always get the vibe that everyone in the audience around me shares my feelings.  Frankly, the fact that Cody has afforded me the chance to experience so many Phil Lesh concerts by extending the musicians life is minutely trivial compared to the gifts he bestowed on to so many.  It might be selfish of me but I’m still very thankful.

At the end of the show Peter Shapiro (the jamband magnate who bought and restored the amazing Capitol Theatre) presented Phil with a birthday cake and we all had a piece.  It was a sweet treat to cap a great night at The Cap, and just one more tasty morsel of life shared with the great Philip Chapman Lesh.