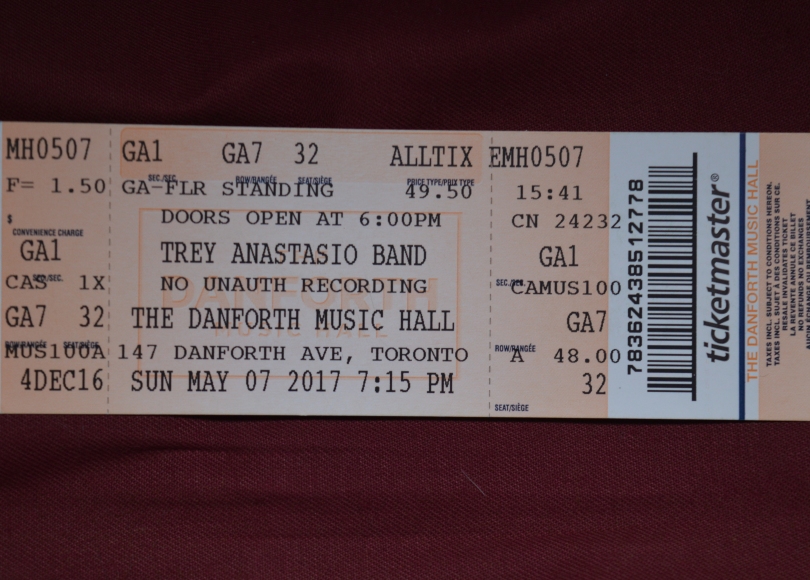 Is it possible that I made it all the way to May 7th, 2017 before stepping foot into the Danforth Music Hall?  It seems impossible that I was able to elude one of Toronto’s classic venues for so long, but my memory informs me that I did, and who am I to argue?

Seems fitting I suppose that it was Trey Anastasio who drew me in for my inaugural show in the century-old theatre; just the mention of Phish tends to get me in my car.  After spending a fun night at a friend’s place out in the ‘burbs m’lady and I checked into a cheapo suite hotel downtown and prepped for the show with some more friends before heading the venue.

The place is old alright, and it looks it.  The lobby is the very definition of nondescript.  Inside I found the place packed.  My small crew and I convened on the raked floor far off on stage right, close enough to the stage for an adequate enough view of the band and even closer to one of the several busy serving stations.

Trey and his band came out to very welcoming applause and tore through a first set that was bright, crispy, and uber-professional.  Well, except for the surprise local cover, which trainwrecked the end of the first set.

Y’see, anyone who had been watching the band’s setlists from the tour (which was everyone in attendance, I’m sure) noticed that Trey and his band had been debuting a brand-new cover song at  most of their stops along the way, and the covers always had a local connection: a Willie Nelson song in Austin, a Col. Bruce Hampton tune in Tulsa, a Chuck Berry tune in St. Louis…

Oh, I can’t tell you how much I was hoping Trey was going to play a Tragically Hip song in Toronto, especially because…Gord Downie.  I hoped against hope against hope, knowing the whole time that it was impossible.

But still I hoped.

Instead, Trey closed out the first set with a tune that that had me and all my friends scratching our heads.  Soon we got word that it was a song by Broken Social Scene called Cause = Time.  Geez, could I have been any more disappointed?  It was almost a relief when Trey started bumbling the song (obvious even to those of us who had never heard it) and stopped the band altogether about three lines in; a real-live musical trainwreck.

Trey even politely asked the audience to collectively please, please try and resist posting any footage of their musical disaster on the internet, a plea that I’m sure is readily available on YouTube.  The band obviously spent the setbreak going over the song a few times because they started off the second set by trying it again, and I’m told they nailed it.

Now that I think about it I’m glad they didn’t try a Hip song after all.  I can’t imagine how I would have felt if I had watched them butcher it so badly they had to stop and beg the crowd to erase the footage.

Anyway, it was the only discernible blunder in an otherwise rollicking good concert, which included a fair smattering of Phish tunes and closed with an absolutely jaw-dropping blaze through Dazed & Confused.  Trey brought one of his backup musicians up to the front of the stage and handed her half of the spotlight and absolutely she ran with it.  She and Trey exchanged blistering trade-offs in front of a stunned audience that just went on and on and on and on and on…

Now, what did we do after the show?  I’m pretty sure it was back to the suite for at least a contingent of our small crew, where pizza and chilled refreshments would have accompanied our gasping memories of the excellent show we had just shared.