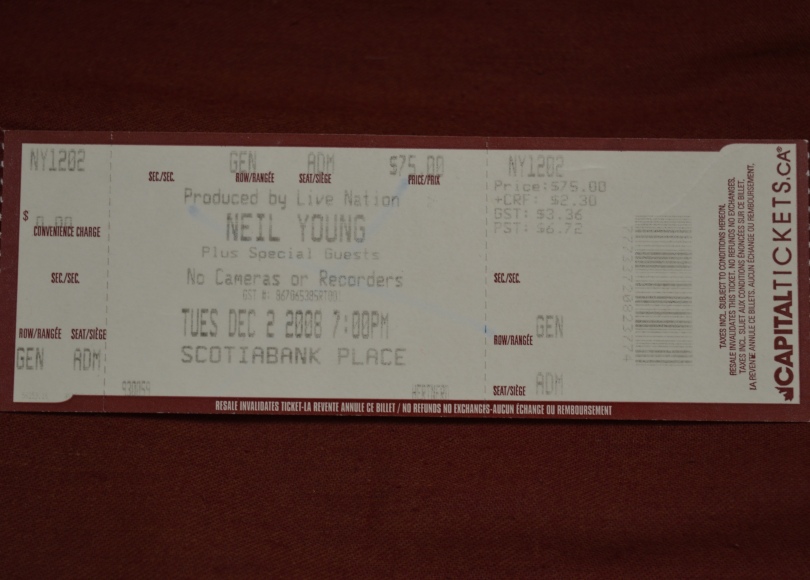 Just two days after returning from an astounding musical trip through the Dogon Valley and Timbuktu in the West African nation of Mali, on December 2nd, 2008 I was able to re-immerse myself in the greatest of Canadian music when I once again had the honorific pleasure of witnessing one of Canada’s – nay, the world’s – great musical treasures: Neil Young and his band of rock and roll rebels* at the Kanata Coreltire Bank Palladium just a half-hour drive west of home.

Heck, it was so close it almost felt like a local show.

Also on the bill was Everest, whom I have no recollection of, and Wilco, who spent their set confirming my ongoing suspicion that if I ever give the band half a chance I might one day start actually liking them.  Their guitar player is spectacular.

But of course the meat and potatoes of this three-course meal was the great Neil Young, leading his sneaker-staring posse of hard rockers through an epic romp of pop music gems with his (un)usual youthful verve and ageless gusto.  Those in the crowd looking for Neil’s acoustic classics like Heart of Gold or Old Man would have to sit patiently through a half-dozen distortion-drenched grinders like Hey Hey, My My (Into the Black) and Cortez the Killer before our sweaty host would give his cohorts a rest and deliver his nearly-standard midset mini-set of solo tunes.

Then it was back to the old grind, with Neil facing in towards his fellow musicians and lifelong friends and chugging out some of the finest crunchy powerchord rock ever written.  Denying the winged keyboard that dangled from the rafters waiting to be employed for Like A Hurricane, instead Neil closed out the set with a raunchy Cowgirl in the Sand and a rollicking cruise through his modern-day anthem, Rockin’ in the Free World.

And remember when I said that thing about him playing some of the best music ever written?  Get this: Neil and the band encored with A Day in the Life, quite possibly the greatest song in the entire oeuvre of the greatest band of all time.  And Neil and his E5 brethren more than did it justice, especially when it came to the cacaphonic ascending orchestral build part.

Imagine Neil Young and Co. mimicking that!  It was just as great as you can conjure, I assure you, and an astounding sonic palette cleanser after being immersed in atonal tribal rhythms for the previous two-and-a-half weeks.

And then it was over, another feather in my glorious Neil Young headdress.

*I don’t know what his band was called but it definitely wasn’t Crazy Horse.  Ben Keith was in it, and so was Pegi Young.