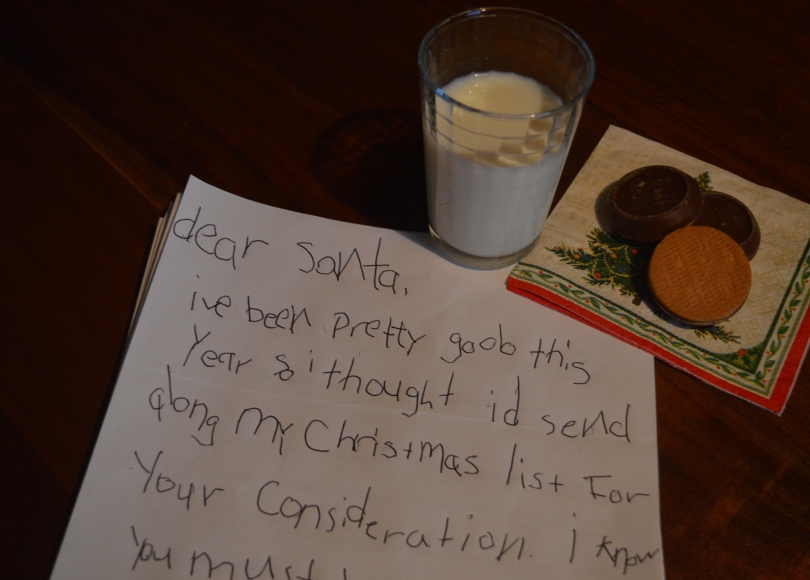 I’ve been pretty good this year so I thought I’d send along my Christmas wish list for your consideration.  I know you must be busy so I’ll keep my list short.  In fact, there is only one item on it:

Please Santa, all I really want for Christmas this year is for super-rich people to stop being so darn greedy.  Is that too much to ask?

When grocery prices go up 15% but grocery store profits go up nearly 50%, well, that can only mean that a fairly big chunk of that 15% increase in our grocery bill is just straight-up greed.  The CEO’s and PR people can point to supply-chain issues all they want but the quarterly reports are there for all to see and those reports suggest that it’s simply the president’s choice to increase corporate and personal profits to record levels while thousands of regular, hard-working folks are forced into food banks and in some cases out onto the streets.  And for what?  Can it really be that bringing in $4.5 million profit every day wasn’t enough for these people?  They had to ratchet their profits up to over $6 million per day over the course of a single year?!?  Really Galen, are you and your fellow food mongering hand-wringers really that greedy?

Fifteen thousand people have died in Ukraine this year because of a wholly unnecessary war that was invented by a single man’s ravenous greed.  It’s frightening to watch one of the wealthiest and most powerful people in the world wallow in unfulfilled desire so publicly.  Knowing that someone can be so blinded by greed that he can’t see how much harm his overbearing gluttony causes – even to himself – makes me wonder if greed may be a vice too strong to be resisted.  Oh Santa, say it ain’t so!

A clothing line, countless record sales, endorsements, sneakers, tabloids, fame and money beyond what anyone could ever hope to achieve.  My goodness, how can these things possibly not be enough for one man and a microphone?  How can a person who finds himself standing on top of the biggest media mountain in the metaverse be so greedy for attention that he’ll start promoting Hitler?  Hitler!?!?!  How can that level of insecurity even exist?  And for what?!?!?  For a yacht that is fifty feet longer than his old one?  For a few million more “likes” on his whateverpage?  For a bump in his share of the world’s social media attention?  For all of this nothingness the guy stands on top of the planet’s highest pedestals and screams that he loves Nazis?  You’ve got to admit Santa, Christmas (and everything else) would be a damn sight better without that level of insatiable insanity permeating the news cycle.

Now I know that this might be asking an awful lot, but if we could live in a world where an angry narcissist hopped up on fast food and golden toilets who Keystone Kops himself into the Oval Office can just be happy that he was voted out before he got himself into any real trouble instead of spouting a bunch of divisive doublespeak “stolen election” baloney, well, I’m pretty sure that would make the season a whole lot more jolly for pretty much everybody (save one).  I mean, to think that a guy who spent his life being lathered in such privilege could possibly complain that he’s entitled to even more fat from the hog just puts my off my turkey.

Anyway Santa, there’s my Christmas wish list for this year.  Not a gift card for The Keg, not a pair of socks with “Bring Me Wine” printed on the bottom, not the newest iThing14…just a little less greedy me-me-me-ness from the top .00001% please.

Postscript:  You may have noticed that I didn’t say anything about the veritable poster-child of greed, Elon Musk.  I was afraid that the mere mention of such a pathetically vacuous psychotically self-grandiose soul-less shell of a man would make you think my request impossible.  Plus I didn’t want to turn you off your milk and cookies.  Merry Christmas!