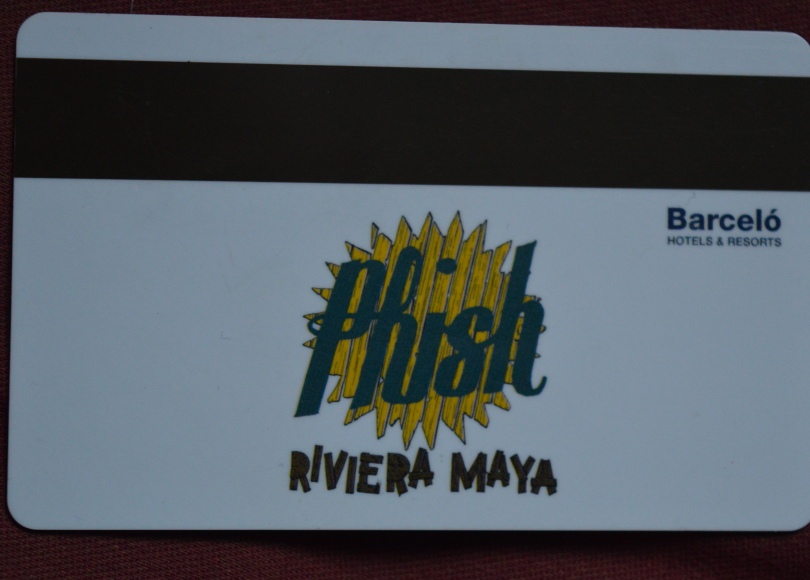 January 17th, 2016 was the final day of Phish’s inaugural three-night sojourn in Mexico’s Riviera Maya.  Overall it had been a rare case of a heavily anticipated event that had vastly surpassed all expectations.  In short, it was among the greatest concert experience I’ve had, and frankly that’s saying something.

Lounging by the pool, grabbing burgers at the beach restaurant, drinking tequila shots at the swim-up bar, chilling with friends and strangers on the pristine beach…all these activities were so prevalent that they were starting to feel old-hat, almost routine.  But somehow I hunkered down and got ‘em all done.

After an afternoon of hard-core relaxation m’lady and I went back to our room and dressed up in our finest casuals.  For dinner we had booked one of our ’special restaurants’ at one of the two Japanese places on the resort where eight of us sat around a hotplate while a smiling chef dazzled and entertained us with his clever cleaver juggling and tried-and-true comedic food manipulation.  As he cooked he carved our dinners into surprising shapes and lobbed Brussel sprouts across the table for us to catch in our mouths.

It was good, but all I kept thinking was, “Don’t play with your food.”

After dinner we rushed back to our room, got back into our most casual casuals and beach-strolled our way to the last night of Phish.

The show opened with a song that everyone had been expecting all weekend – the very obvious Mexican Cousin – and ended with one that I don’t think anyone saw coming, the also very obvious cover of Led Zeppelin’s The Ocean, which was just a drop-dead awesome way to end an fantastic three nights of music.  Again the crowd was small and excited, again the eager resort staff kept busy making sure nobody was thirsty, and once again the band raged under a starry night while the ocean’s waves pummelled the beach just a few metres away.

After the show that night the resort hit full bustle, as a thousand-plus barefoot neo-hippies celebrated the last hurrah of the extremely successful first Phish Mexico run (of three, as rumour was having it).  Though we were fortunate to have booked an extra night at the Barcelo and wouldn’t, in fact, be leaving in the morning (or maybe because we had booked it) m’lady and I partied like it was our last hurrah right along with everyone else.

So much, in fact, that we spent that extra last day in full recovery mode, both of us thanking our lucky stars that we didn’t have anything to do but to sit and suffer another day in paradise.  Neither of us touched a drop of alcohol all day; we just sat and moaned quietly to ourselves and stared groggily at the mass exodus of moaning, groggy hippies that was happening around us.

Thankfully, we were in much better shape when we did finally have to check out when, with happy, tired eyes I gazed out the window of the airport shuttle bus and bid farewell (for a year) to Riviera Maya, the Barcelo, and Phish Mexico.